Apple Pay to support group purchases, gets a revamp on macOS Ventura

Starting with iOS 16, iPadOS 16, macOS Ventura and watchOS 9, Apple Pay will allow users to pay multiple merchants in a single transaction in supported apps. Apple says the feature will allow users to make a bulk purchase, such as a travel package with flights, a rental car, and a hotel room, all on a single Apple Pay payment slip.

Apple Pay has also received a redesign on macOS Ventura, with the payment sheet now resembling that on iOS 15 and later. 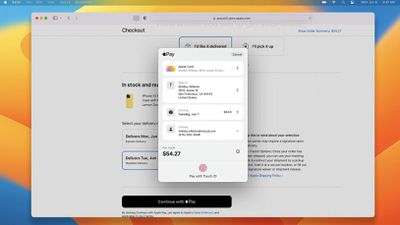 As we previously reported, Apple Pay on iOS 16 also gets itemized receipts and order tracking information for Apple Pay transactions in the Wallet app. Additionally, a new Apple Pay Later option will allow customers to split a purchase into four equal payments over six weeks, with no interest or fees to pay, according to Apple.

iOS 16, iPadOS 16, macOS Ventura, and watchOS 9 are currently in developer beta and will be available to all users in the fall.

Apple this week suspended its Apple Pay service for the Mir card payment system in Russia, closing a loophole that had allowed Russians to continue using the Apple Pay service. According to Reuters, Mir remained signed in to Apple Pay even after Apple restricted use of the payment service in Russia on March 1 for Mastercard and Visa cardholders. National of Russia…

Survey: Only 6% of iPhone users in the US who set up Apple Pay actually use it

According to a detailed study by PYMNTS, only six percent of iPhone users in the United States who have set up Apple Pay actually use this feature. Seven years after the launch of Apple Pay in September 2014, 93.9% of consumers who have Apple Pay activated on their iPhone do not use it to pay for purchases in stores, which means that only 6.1% do. In 2015, the year after Apple Pay…

Apple is developing a new Pay Later service that will allow customers to pay for Apple Pay purchases in installments over time, Bloomberg reports. Installment payment options will be available for all Apple Pay purchases, with functionality not limited to Apple products. The service is similar to Paypal’s Buy Now, Pay Later feature, and internally it’s called “Apple Pay Later.” Apple is…

iOS 16 makes it easier for users to track orders and packages with an integrated tracking tool in the Wallet app for Apple Pay transactions. Previously, users had to download a third-party app from the App Store to track their packages. With iOS 16, Apple is building a tracker directly into the Wallet app for Apple Pay transactions. The new integration with Wallet will allow merchants and…

Apple launches Tap to Pay on iPhone this month

At yesterday’s WWDC, Apple announced it would launch Tap to Pay on iPhone this month, allowing small merchants and independent sellers in the US to use their iPhone as a payment terminal. Announced in February, the feature allows compatible iPhones to accept payments via Apple Pay, contactless credit and debit cards, and other digital wallets, with just an iPhone. Press to…

Popular cryptocurrency exchange Coinbase has announced that it now allows merchants to use bank cards linked to Apple Pay to purchase crypto assets on the platform. “Today we’re introducing new, seamless ways to enable crypto purchases with debit cards linked to Apple Pay and Google Pay, and instant withdrawals of up to $100,000 per transaction available 24/7. “said a Coinbase blog post on…

Apple’s Worldwide Developers Conference (WWDC) begins today with the traditional keynote at 10:00 a.m. PT. We expect to see a number of announcements, including iOS 16, macOS 13, watchOS 9, and tvOS 16, though we don’t know what else we’ll see at the event. A redesigned MacBook Air tops the list of potential new hardware, but supply chain issues…

Everything Apple announced at Keynote WWDC 2022 in 13 minutes

Apple held a keynote event on Monday which saw the introduction of iOS 16, iPadOS 16, macOS 13 Ventura, watchOS 9 and the new Apple M2 silicon chip, which will soon be available in the MacBook Air and the 13-inch MacBook. Pro. Subscribe to the MacRumors YouTube channel for more videos. It was a crazy event where Apple introduced feature after feature for nearly two hours straight. For those who…

Apple today introduced iOS 16, the company’s next major update for the iPhone, featuring a redesigned and customizable Lock screen, improvements to Messages, Maps and Home, new sharing capabilities and customization, and more. Lock screen, notifications and focus An all-new, fully customizable lock screen allows users to change a host of design elements, including text styles and…

Apple today announced at WWDC 2022 the next-generation MacBook Air with the all-new M2 chip, a redesigned unibody case, a brighter display with a notch, new color options like Starlight and Midnight, MagSafe charging, a 1080p camera, and more. Subscribe to the MacRumors YouTube channel for more videos. The new MacBook Air looks like the latest 14-inch and 16-inch MacBook Pro…

What’s New in tvOS 16 for Apple TV: Features and Improvements

While Apple TV was an afterthought during the WWDC 2022 keynote, there is indeed a new tvOS 16 update for all Apple TV HD and Apple TV 4K models, with the first version beta released yesterday for developers. Below, we’ve rounded up several new features and improvements coming in the software update. An overview of new features in tvOS 16 for Apple TV:Multi-device connectivity: Apple…

Apple today announced at WWDC 2022 the “next generation” of CarPlay, which will support multiple screens in a vehicle, offer integrated climate controls to adjust the air conditioning temperature or heat in the CarPlay interface, and more. The next-generation CarPlay experience will be able to deliver content across multiple screens within a vehicle, and deeper integration with a…

iOS 16 introduces some major changes, including a total redesign of the iOS lock screen. The lock screen looks different, it’s more customizable, and it can do more than ever before, so we thought we’d do a quick hands-on video to give MacRumors readers a first look at the revamped lock screen. Subscribe to the MacRumors YouTube channel for more videos. The lock screen can be customized…

Resetting MacBook Air is easy as you only need to follow a few basic steps.

How to use the Stage Manager feature on macOS Ventura

How to use Continuity Camera on macOS Ventura and iOS 16