Mistral announced a $1,450 AI-SFK Lite (AI-enabled Sensor Fusion Kit Lite) kit for AI, machine vision, and video analytics applications, including an edge camera with object detection and recognition , human activity recognition, smart retail, Industry 4.0, fusion radar camera sensor, robotics and ADAS. The system is built around its carrier board Neuron Base Board Basic (NB-Basic). The AI-SFK Lite uses the Jetson Xavier NX based version of the NB-Basic, which also supports the Jetson Nano. 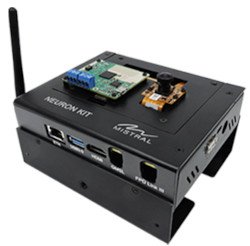 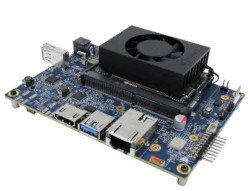 When we covered the Neuron carrier in October 2020, Mistral said there would be an optional mmWave module. Mistral’s 77 GHz millimeter wave radar module comes standard with the AI-SFK Lite, which also adds an 8-megapixel camera and housing.

Mistral says the AI-SFK Lite was released in response to the worldwide shortage of controller chipsets for GMSL and FPD Link interfaces. Mistral has a product page, but not a press release or purchase link, for a similar product AI-SFK kit based on the Neuron Base Board Turbo. The Turbo model expands the base model’s 2-way CSI interface to add a second 4-way channel. It also provides support for FPD-Link III and GMSL cameras via FAKRA connectors. (Note that the enclosures are the same for the AI-SFK and AI-SFK Lite, as seen in the image above, which shows empty GMSL and FPD-Link III port holes.)

FPD-Link III can connect cameras and radar sensors via coaxial cables up to 15 meters. The more advanced GMSL, derived from SerDes, has a similar range and supports bidirectional data, power, and control without losing latency.

The mmWave radar module is based on TI’s mmWave radar sensors. Very high frequency, short wavelength mmWave technology operates at 30 GHz and 300 GHz to provide sub-millimeter accuracy. The technology can penetrate weather, as well as materials such as plastic, drywall and clothing. mmWave not only detects objects, but offers precise measurements of distance, speed and angle. Mistral also offers a few 60GHz models, but not with the Lite kit.

The camera module comes from Leopard Imaging and is based on Sony’s iMX219 color sensor. The 8MP/4K camera connected to the CSI supports rates up to 21 fps.

On the Neuron base board, AI algorithms running on Jetson GPU and CUDA libraries can combine mmWave data with camera and sensor inputs to provide local intelligence. A neural development kit incorporates algorithms based on CUDA, cuDNN, and TensorRT from Nvidia’s Ubuntu-powered Jetpack SDK. The algorithms are optimized for sensor fusion using the mmWave board, camera and attached sensors. Alternatively, you can load Ubuntu 18.04 “natively”. 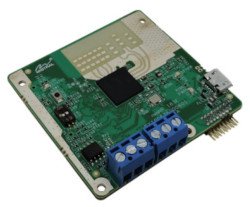 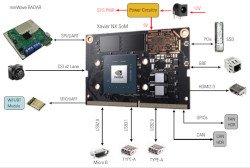 Other features include CAN interface, UART debug, I2S header and GPIO header. There is a 12V/5A to 24V/2.5A input, an operating range of -20 to 85°C and various accessories. (For more details, see our Neuron Base Board report.)

The AI-SFK Lite is available for $1,450, with a delivery time of 8-10 weeks. More information can be found in Mistral’s announcement (PDF), as well as the Purchasing AI-SFK Lite and product pages.