Aaeon has unveiled one of its fanless Boxer computers powered by a Jetson Xavier NX module and featuring 8 Power-over-Ethernet GbE ports for powering cameras and other devices, as well as 2 standard GbE ports. The 210 x 164.2 x 75mm Boxer-8254AI is larger than most Boxer systems, such as the Xavier NX powered Boxer-8253AI, which has 2 PoE ports and a standard GbE port, and the old Boxer-8251AI, which has a single GbE port.

The Boxer-8254AI features a hexa-core Xavier NX with 8GB LPDDR4 and 16GB eMMC running the usual Ubuntu stack with the Nvidia JetPack 4.5 (and above) SDK for AI development. The system adds a microSD slot and a 2.5-inch SATA bay, and mSATA is available on the full-size mini-PCIe slot along with PCIe and USB. There is also a SIM card socket, 4 SMA antenna mounts and an M.2 dongle slot for WiFi/BT. 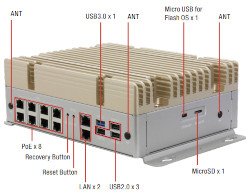 Detailed views of the Boxer-8254AI
(Click on images to enlarge)

The Boxer-8254AI is powered via a 24V terminal block with optional adapter and offers an LED plus power switch and recovery and reset buttons. The 2.5kg wall mount system has an operating range of -15 to 60°C with an airflow of 0.5m/s, per IEC60068-2, plus vibration 3, 5 Grms and a peak impact resistance of 50 G.

No pricing or availability information was provided for the “preliminary” Boxer-8254AI. More information can be found on Aaeon product sheet.